For a number of years now (I started maybe in 2017) I have been using an ergonomic split keyboard of open source design, the Ergodox. You can either build it yourself from scratch, build it from parts or buy a completed working keyboard from a company or an independent builder. I have two, an Infinity and an Ergodox-EZ. 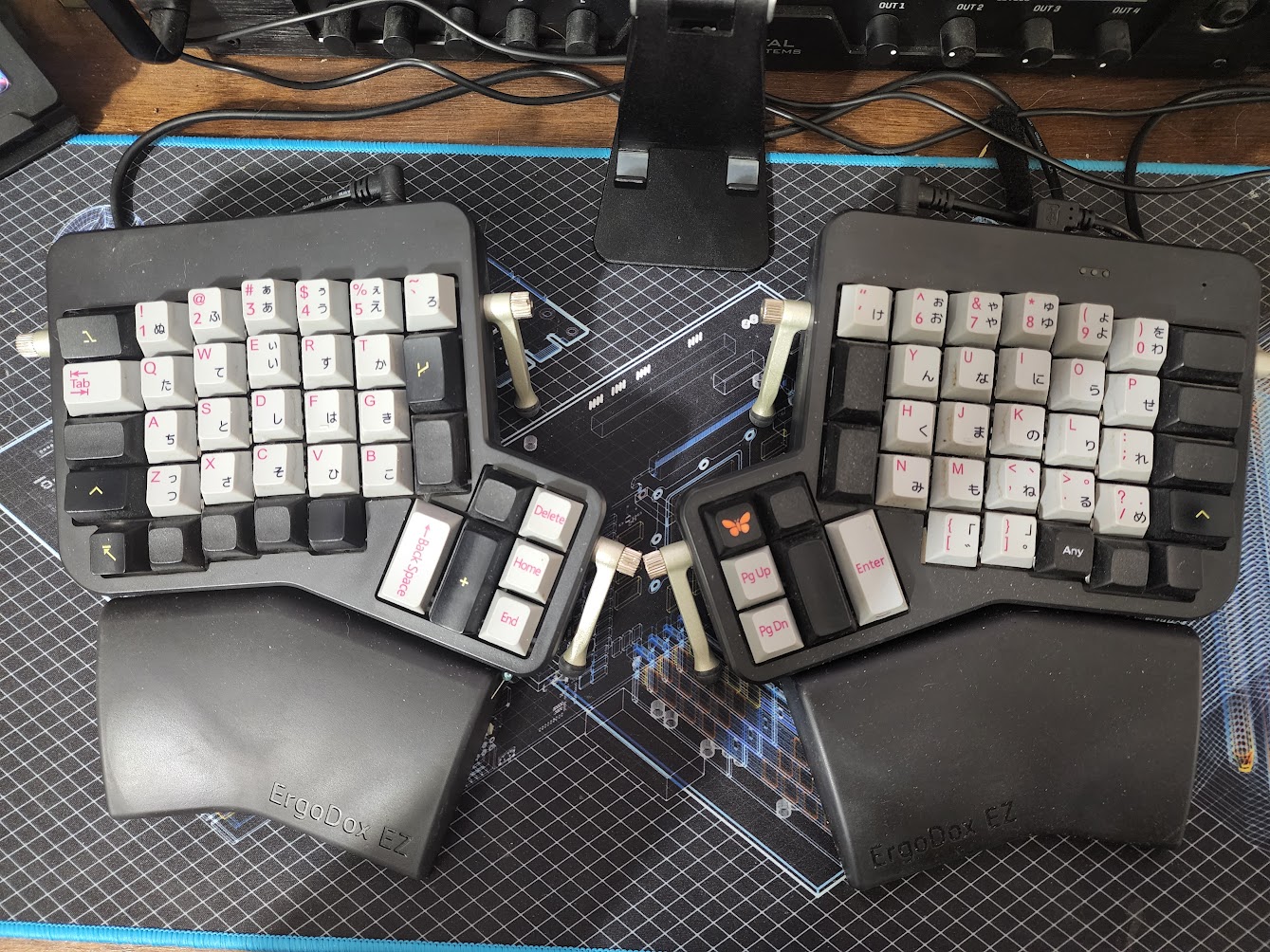 I have keycaps with Japanese legedns because I'm a weeb. Also notice the Gamers Nexus mousepad.

While the ergonomics and coolness factor of it being split (thats the reason I got it in the first place!) are pretty nifty, the best feature by a longo shot is that it is completely customizable, mine uses the open source firmware QMK, I’m not going to talk too much about what QMK is or how to use use it, you just need to know its a very configurable firmware for keyboards that is coded in C, and its compatible with a huge number of different keyboards.

I’ve been feeling really good using it and it was easy to adapt to the layout, altought I still don’t find a good spot to place the right half, my right hand never hurts but its not very confortable either, I still have to find the perfect spot for it.

My custom layout is not very adventurous, its mostly just normal Qwerty, with a couple modifications to make it more streamlined to what I do in my day to day. You can see it here: online configurator.

I used to edit the code by hand and compile it myself, but I recently found out the online configurator has gotten much better than it was and now it mostly satiesfies my needs.

Its still a work in progress, buts lets take as quick look:

This is my main writting layer

Not much to see here. Just a basic QWERTY layout. I have buttons to change layers momentarily in the right thumb cluster. I also have two spaces, one on each side. I am still playing with this layout so many of the keys are close to the default and they don’t actually get used by me yet.

You could call this my functional layer

This is mainly a layer for some functions. Do not pay attention to the symbols on the left side, I do not use them and they are there as leftovers from the default layout.
I decided to take the keys that are normally WASD and make them the arrow keys, this makes for a easy seamless navigation (specially for games). The macros are just shortcuts to copy and paste (they are located where the C and V keys normally are), as well as easy access to Ctrl+Alt+Del (located on the bigger key at the rightmost corner), and also a shortcut to bring up Ditto (my clipboard manager in Windows). Pretty handy.
On the right half there is a numpad, but I rarely use it. In fact I forgot it was there until I wrote this!

Pretty simple too. I replace WASD with keys to move my mouse pointer around; and the Q and E keys become left and right click respectively. I also set up some keys here to control the volume and media that is playing. Everything else is still the default for now.

What I want to do

I want to play around more and come up with new exciting things to do and change.
For one, I want to learn a new layout. Dvorak maybe? Or something else, I’ve always been intrigued by these alternative layouts but always been to lazy to actually commit and make the change. Maybe now I will be able to do it if I have it in a separate quick to access layer…